*NOTE: The Essen Haus will be closed Mondays and Tuesdays until further notice. Last call can occur up to an hour before close. Hours are subject to change.

Celebrating over 35 years as a top Madison restaurant and banquet hall! 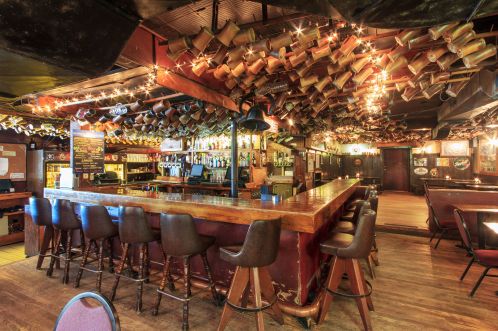 By the late 1800s, however, the area had fallen into disrepair. The train station in the neighborhood promoted the transient lifestyle and taverns and houses of ill-repute populated the area.

This trend continued for nearly another 100 years. This changed in the 1980s when Bob Worm saw something great and fun for the block. From this vision, Spass Platz (Madison’s Place for Good Times) was born.

He bought the building that became the Essen Haus, and later bought the Come Back In and the Up North Saloon, along with the historic old Wilson Hotel, which he named the Ruby Marie after his mother. The Lakeview Deli & Bakery is nestled in the first floor of the Hotel Ruby Marie where hotel guests enjoy complimentary breakfast.

These days this block of East Wilson offers a unique destination for locals and tourists alike. Known for its great German food, live polka bands, and boots full of beer, Essen Haus helped turn a once thriving area back to its original roots of fun times and cordial hospitality.